“The signing of the LOI with the Port of Ashdod further expands our international footprint by formalizing collaboration with our institution, the State of New Jersey and the nation of Israel at a time where critical conversations are being had on issues related to sustainability, climate change, and supply management,” said Sue Henderson, Ph.D., President of NJCU. “I am delighted that this unique partnership will further innovation with our NJCU School of Business and the Guarini Institute for International Education and Economic Mobility. This is yet another milestone in the continuation of our successful global initiative projects.”

“Ashdod Port is happy and excited about the collaboration between New Jersey City University, the Port of Newark and Ashdod Port. This is a unique opportunity for startups in Israel to work with Ashdod Port and the International Port of Newark,” said Shiko Zana, CEO of Ashdod Port. “In addition, the establishment of the first innovation embassy in the world is a unique move for Ashdod Port and we anticipate many pilots and collaborations between the various startups, the port and the embassy in New Jersey. The operational continuity of Ashdod Port is essential for the country’s economy, and Ashdod Port has set itself the goal of promoting innovation as part of the port’s ongoing activities.”

As the largest port in Israel, Ashdod Port has a program for maritime startup companies. The LOI signing will help bring these startup companies to NJCU for potential pilot programs and other opportunities at ports in New Jersey.

“The Guarini Institute at NJCU aims to advance economic mobility via innovative programs with international companies and entities,” said Dr. Adrian Franco, Executive Director Guarini Institute for International Education and Economic Mobility, NJCU. “The agreement with the Port of Ashdod is a compelling example of how we can build on the distinctive bond between Israel and New Jersey to advance our common goals. The Guarini Institute, the School of Business and the entire NJCU community is looking forward to implementing the objectives of the LOI and generating world-renowned innovations in port management in Ashdod and New Jersey.

Dr. Bernard McSherry, Founding Dean of NJCU’s School of Business, added “Recent disruptions to the global supply chain have focused attention on the need to modernize and strengthen the logistics of global trade. By drawing upon the NJCU School of Business’ expertise in Supply Chain, Logistics and Maritime Port Management and our Guarini Institute’s skill in fostering international exchanges, this groundbreaking agreement with the Port of Ashdod will facilitate the creation of academic programs, economic development, and “smart port” initiatives that will support businesses and job creation both in the State of New Jersey and in the State of Israel.” 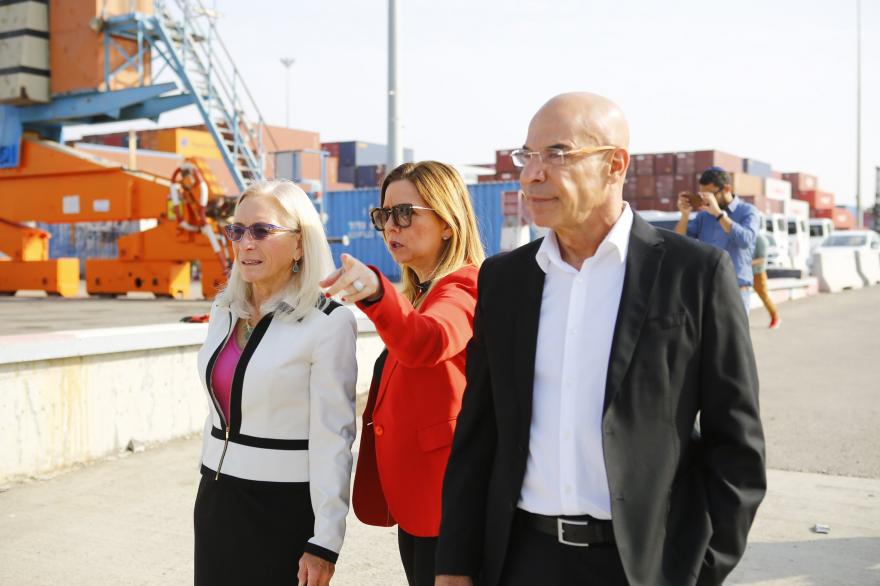 “The historic LOI signed is a real seal of approval for the innovative capabilities of Ashdod Port,” said Ashdod Port Board Chairwoman Orna Hozman-Bechor. “We take pride in this step and look forward to more collaborations in the near future. The delegation from New Jersey is the first delegation from the United States to arrive at Ashdod Port, and we hope for many more in the near future. The event is a significant milestone for Ashdod Port and for the entire State of Israel.”

Located near Tel Aviv, the Port of Ashdod is considered the leading economic gateway to the State of Israel and is Israel’s largest sea port in terms of cargo volume.

“Israel and New Jersey may be separated by an ocean, but this agreement brings us closer than ever by connecting two critical and global ports and taking them into the future together,” said Mark Levenson, Co-Chair, New Jersey-Israel Commission.

“I congratulate the Port of Ashdod and New Jersey City University on this historic moment which is another major achievement in New Jersey’s economic partnership with Israel,” said Karin Elkis, Co-Chair, New Jersey-Israel Commission.

“I am so proud to see this agreement moving ahead following close coordination with Choose New Jersey and the Port of Ashdod, which will drive even more Israeli innovation to our state,” said Andrew Gross, Executive Director of the New Jersey-Israel Commission.

NJCU is among New Jersey’s leading public universities and an anchor institution in Jersey City, offering an affordable, high-quality, diverse learning environment for students located just minutes away from one of the most concentrated and affluent consumer markets in the world. NJCU is working to establish partnerships that will not only accelerate the area’s growth, but will ensure those partnerships benefit its students, faculty and community members.

“NJCU is providing a world-class education that is preparing the next generation for the jobs of the future,” said Jose Lozano, President & CEO, Choose New Jersey. “The LOI signing between NJCU and the Port of Ashdod will help create an exciting new partnership that will create workforce development opportunities that will benefit our students and the region.”